Create an account to save your favorites and track your orders.

Log in with Facebook
Signing up with social is super quick. No extra passwords to remember
Home > Blog > Inspiration > 100 Years of Engagement Ring Styles

The first proposal with a diamond engagement ring happened in 1477, when Archduke Maximilian of Austria presented one to Mary of Burgundy. This started the lifelong tradition of asking your significant other’s hand in marriage with a diamond ring. Although this tradition hasn’t changed, styles of engagement rings have evolved throughout the centuries. More specifically,  in recent decades, styles have changed due to fashion trends, availability of materials, media effects, and much more.

Let’s take a closer look at how engagement ring styles have changed over the years, via a stylish reference from our own collection:

In the roaring ’20s, rings began to reflect the clean lines, sleek motifs and modern geometric designs coinciding with the Art Deco period. The bold linear designs featured surrounding diamonds and side stones. While the metals of choice were often white gold or platinum. Additionally, The opening of Tutankhamen’s tomb in 1922 brought with it elements of Egyptian revival – rubies, sapphires, emeralds, and other colored gemstone accents began to add splashes of color to the Emerald-cut and Asscher diamond rings. 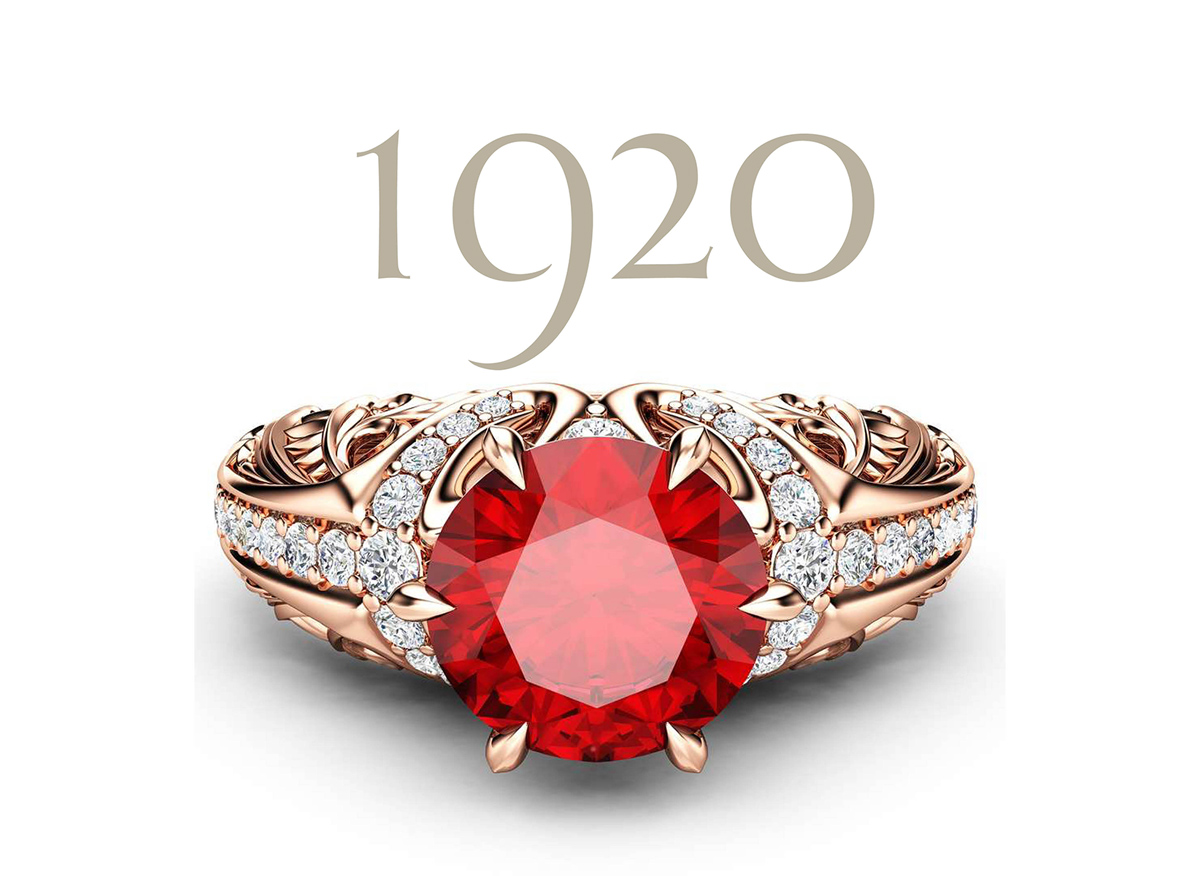 The 1930’s brought two main effects. On one hand, the art deco style was carried over. Only this time complementing the formers with even larger gemstones and bulkier multi-stone settings. The designs were often inspired by great architectural works such as the Chrysler Buildings glittering spire. Platinum and white gold were also very on-trend during this era. On the other hand, most of these luxurious designs were forced to take a back seat for the average couple. The Great Depression forced the proportions to scale down and carats to decrease and couples began to look for more simplified designs with smaller gemstones and detailing. 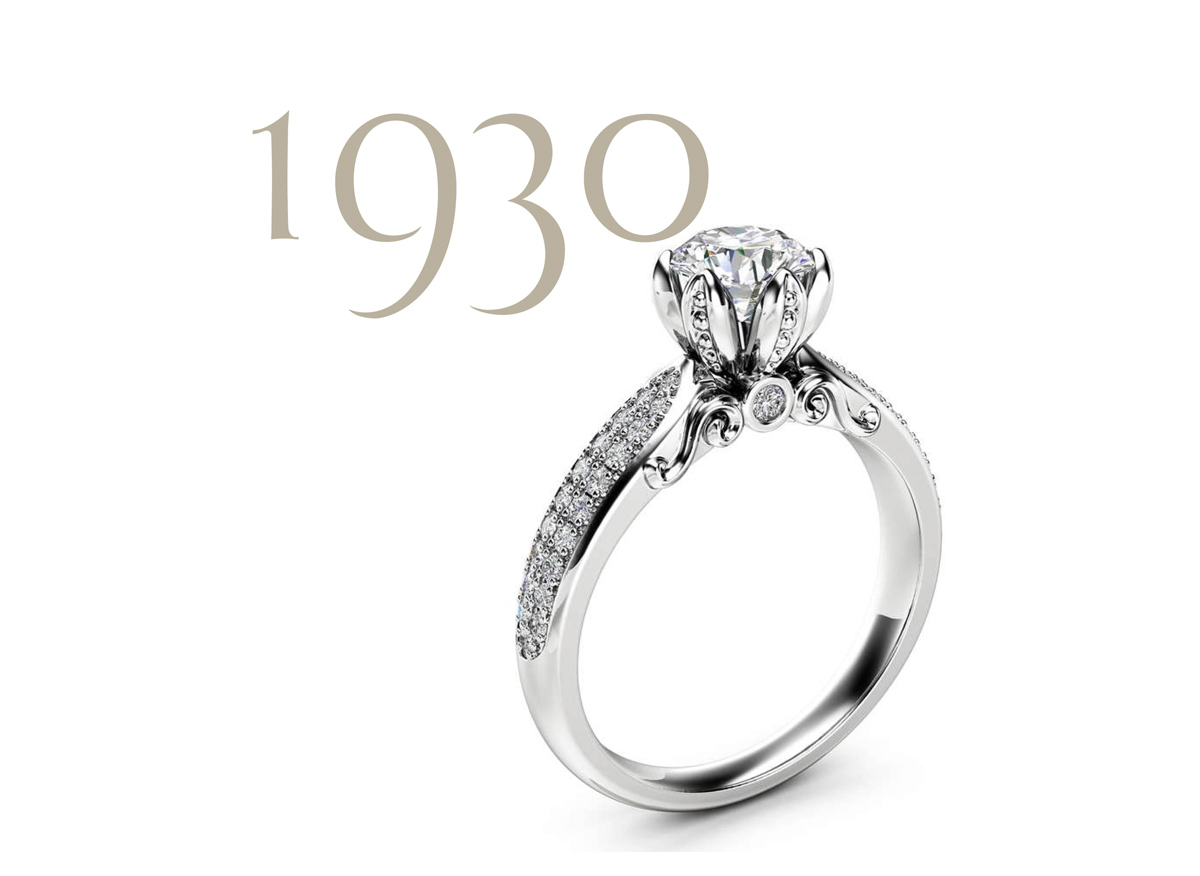 Platinum was requisitioned for war efforts during World War 2. And this caused gold to become the metal of choice for engagement rings.

The 1940’s saw a slow turn away from the sharp lines of the Art Deco era. And this time toward floral-inspired rings with a focus on a solitary stone instead of multiple little stones in a ring.

The 1940’s also marked the decade where diamonds became exclusively associated with engagement rings.  Thanks to the 1947 De’ Beers’ campaign which coined the term “A diamond is forever.” It was the De Beers’ ad that changed perceptions and markets. They marketed diamonds as an unbreakable symbol of love. This single ad pushed the popularity of diamonds through the roof and lasted for the remainder of the century. 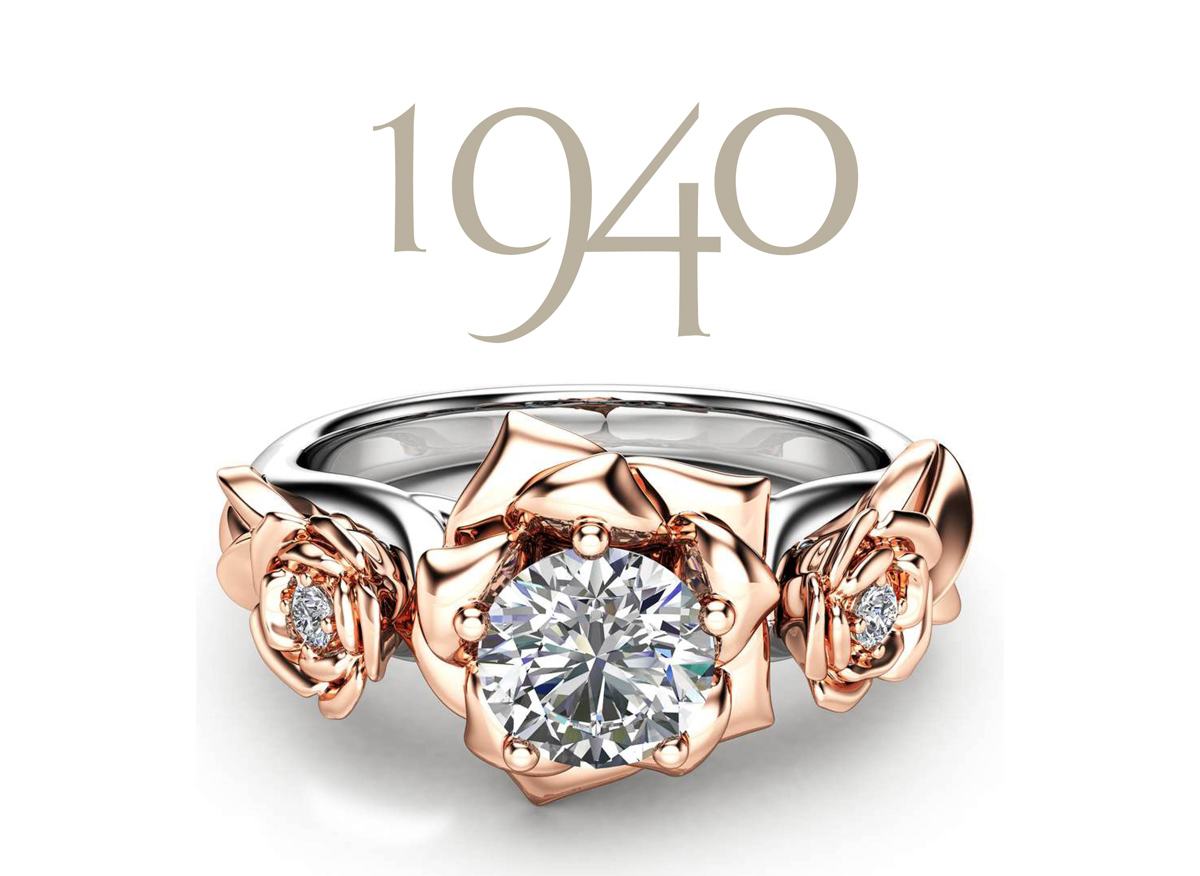 The world began to move past the World War II trauma. Platinum was once again available, making it, along with white-gold, the popular choice for 1950’s engagement ring styles.

This is also the decade where celebrity engagement rings started making headlines. Grace Kelly’s 12 ct. emerald-cut from Prince Rainier III of Monaco in 1956, and Elizabeth Taylor’s 29.4 ct. ring from Mike Todd in the following year. (Suddenly Kim K’s 15-carat ring from Kanye doesn’t seem like THAT a big of a deal, does it? 😊 ) These rings became big topics of conversation and major style setters.

And of course, we couldn’t mention the 50’s without paying tribute to Audrey Hepburn. Her engagement ring from fiancée Mel Ferrer featured a trio of bands, in three different colors of gold.  They were meant to be mixed and matched. But quite often Audrey chose to wear them all together  – Hello stacked rings style! 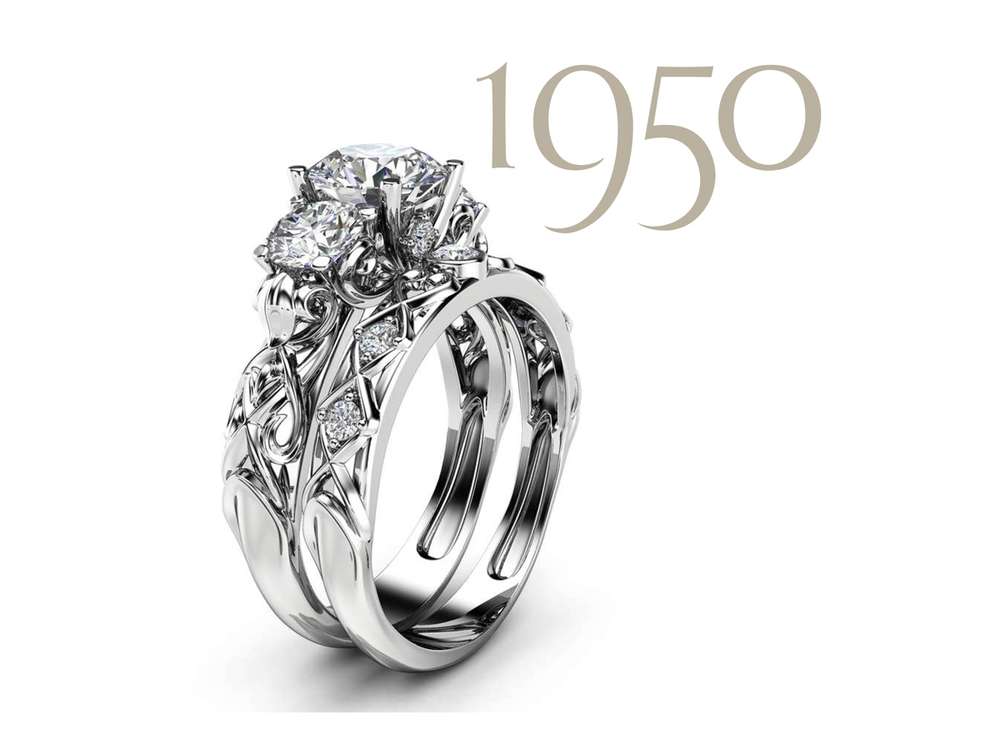 The 1960s, “classic”  diamond engagement ring look has become widely accepted and remains a popular style. However, the other two sides of the scale were inspired by celebrity trendsetters: On one side, Elizabeth Taylor (yes, again) with her massive 33-carat Asscher-cut diamond, given to her by Richard Burton; and on the other side, Jackie Kennedy’s stunning and distinctive diamond and emerald engagement ring. Which made colored gemstones in engagement rings a style statement. 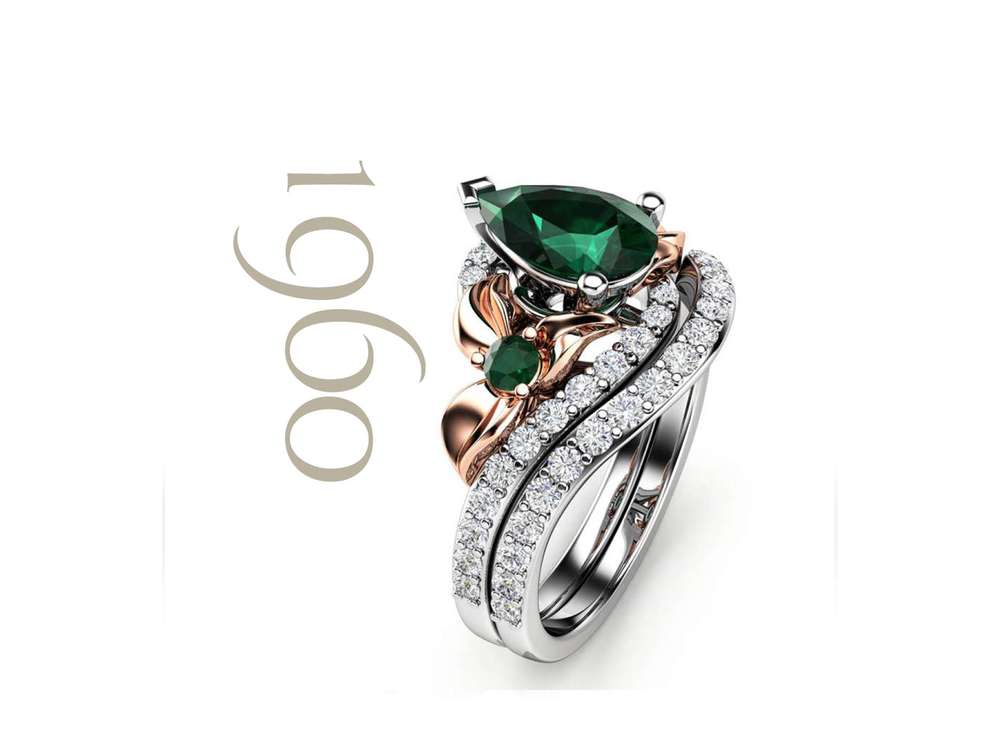 During this decade, brides also began to match their engagement rings to their wedding bands, many of which were yellow- and rose-gold. Coordinating wedding bands to create a complete matching set became a popular trend. And new diamond cuts became trendy in the 1970’s, including princess and emerald-cut diamonds. 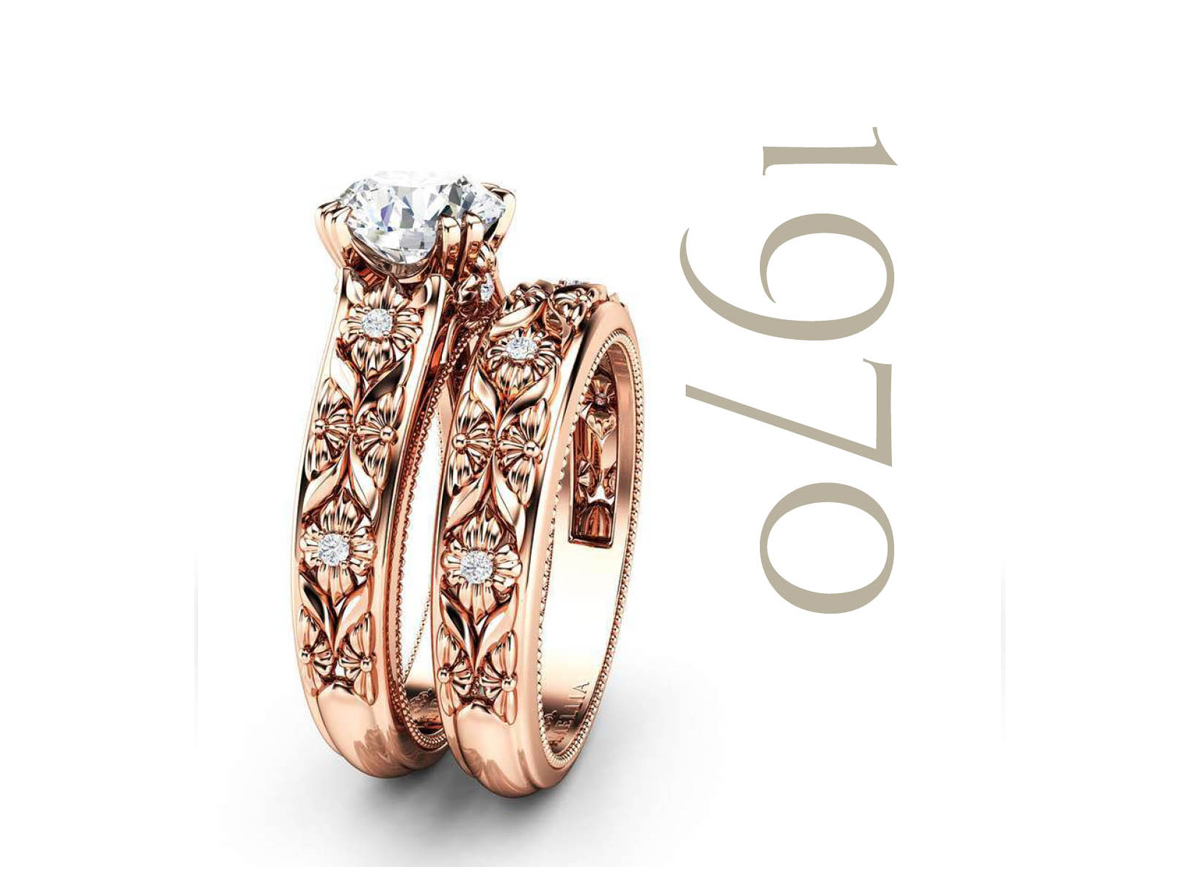 The engagement and wedding of the decade were that of Princess Diana and Prince Charles. But the real star of it, if we may, was her oval sapphire engagement ring. This beauty set off a major sapphire trend and totally changed the nuptials industry. A trend that has come back in full-force when Prince William had given his mother’s ring to Kate Middleton.

With the 80’s came the popularity of pear shapes and marquise cuts, along with the gold metals we know and love. This was a decade of flamboyant style, where bigger, bolder and chunkier are better. 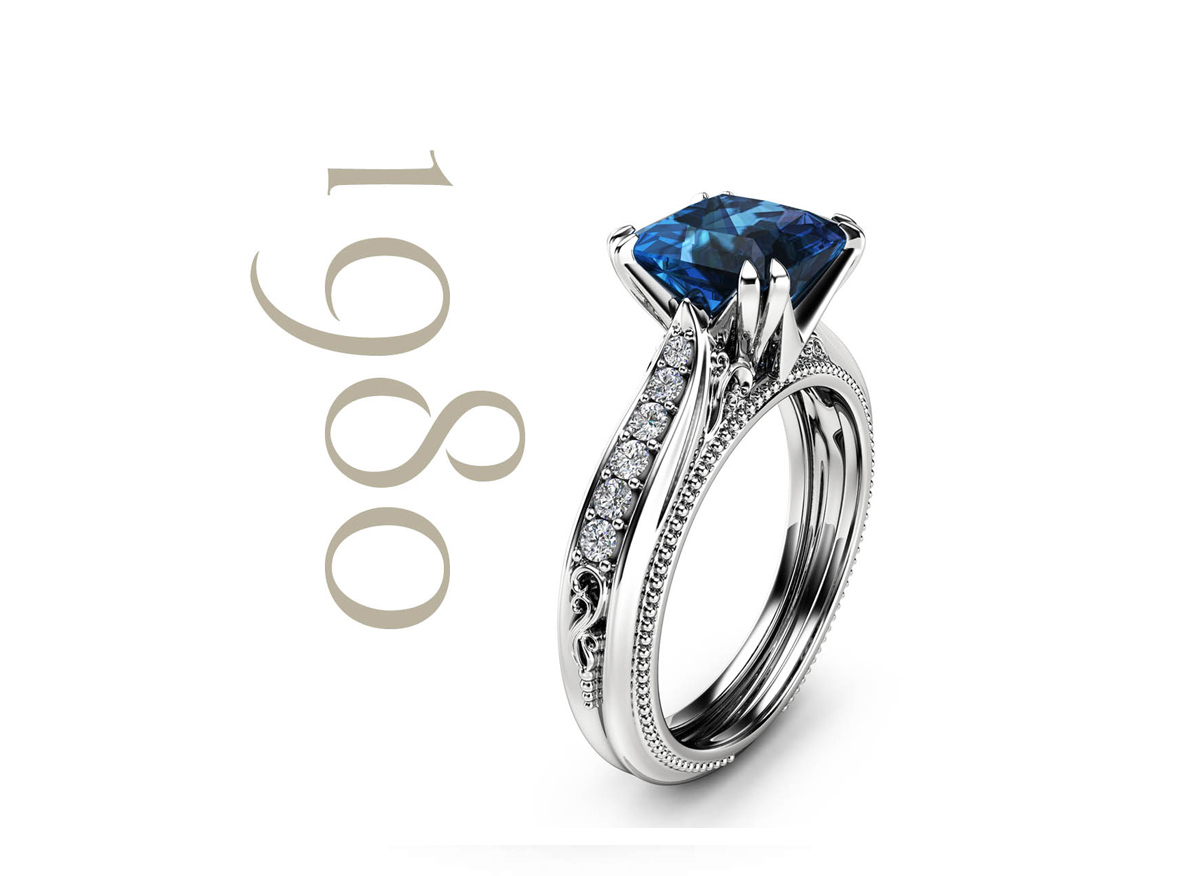 The 1990s saw the rise of even bigger stones and more fancy-cut diamonds. Marquise-cut diamonds became especially popular for their sharp edges and bold look.

Platinum makes a comeback –as does white-gold. Say goodbye to yellow gold for a few years now.

Additionally, thanks to internet usage becoming more popular. Brides-to-be were now able to search for and become inspired by a plethora of engagement ring styles. It wasn’t what their local jewelry shop was showcasing anymore, but her own unique style. 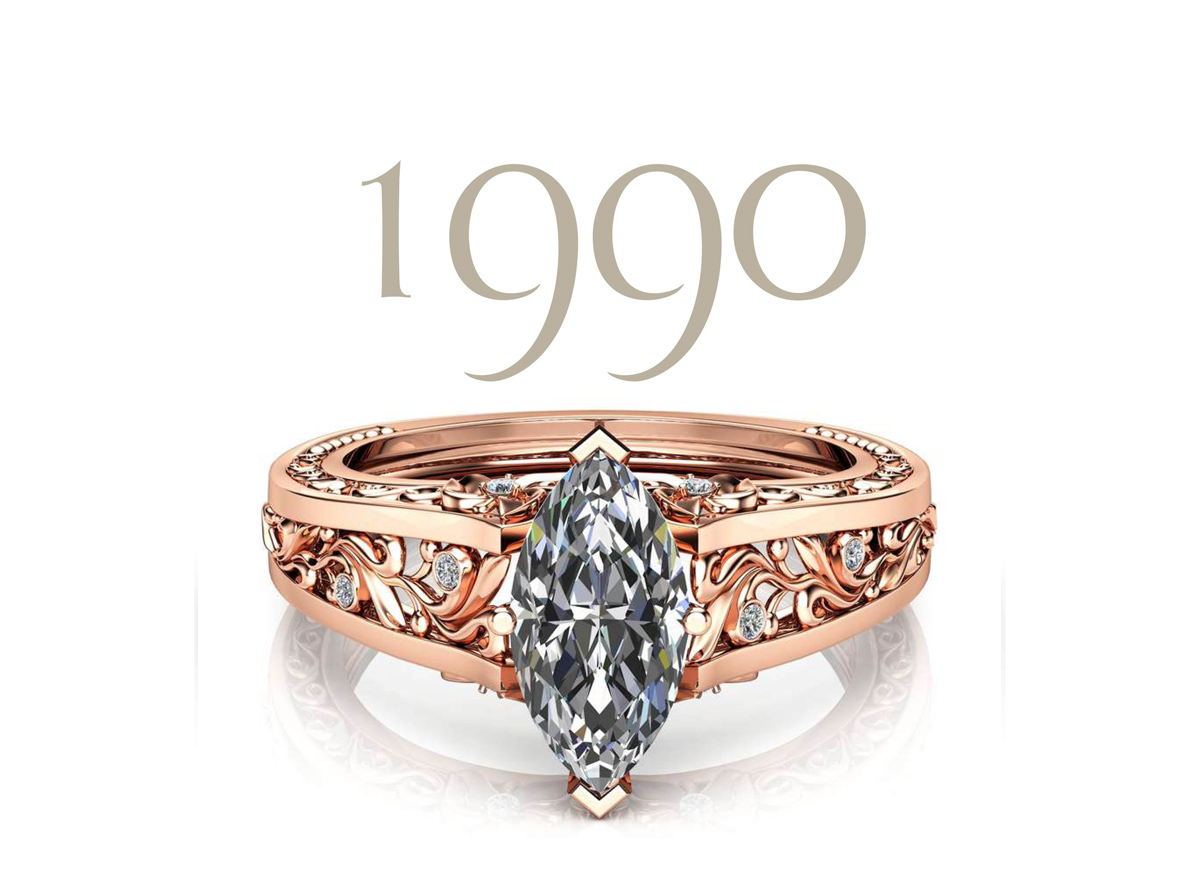 At the turn of the century, engagement rings embraced classic trends such as solitaire rings and princess shaped diamonds. Princess-cut diamonds dominated engagement ring trends in the early 2000’s.

Couples in the 1990s and the early aughts favored square looks and flocked to cluster-style rings that gave a big look for less money. Vintage-inspired rings with pave diamonds, meant to look like those popular in the 20’s, also regained attention. 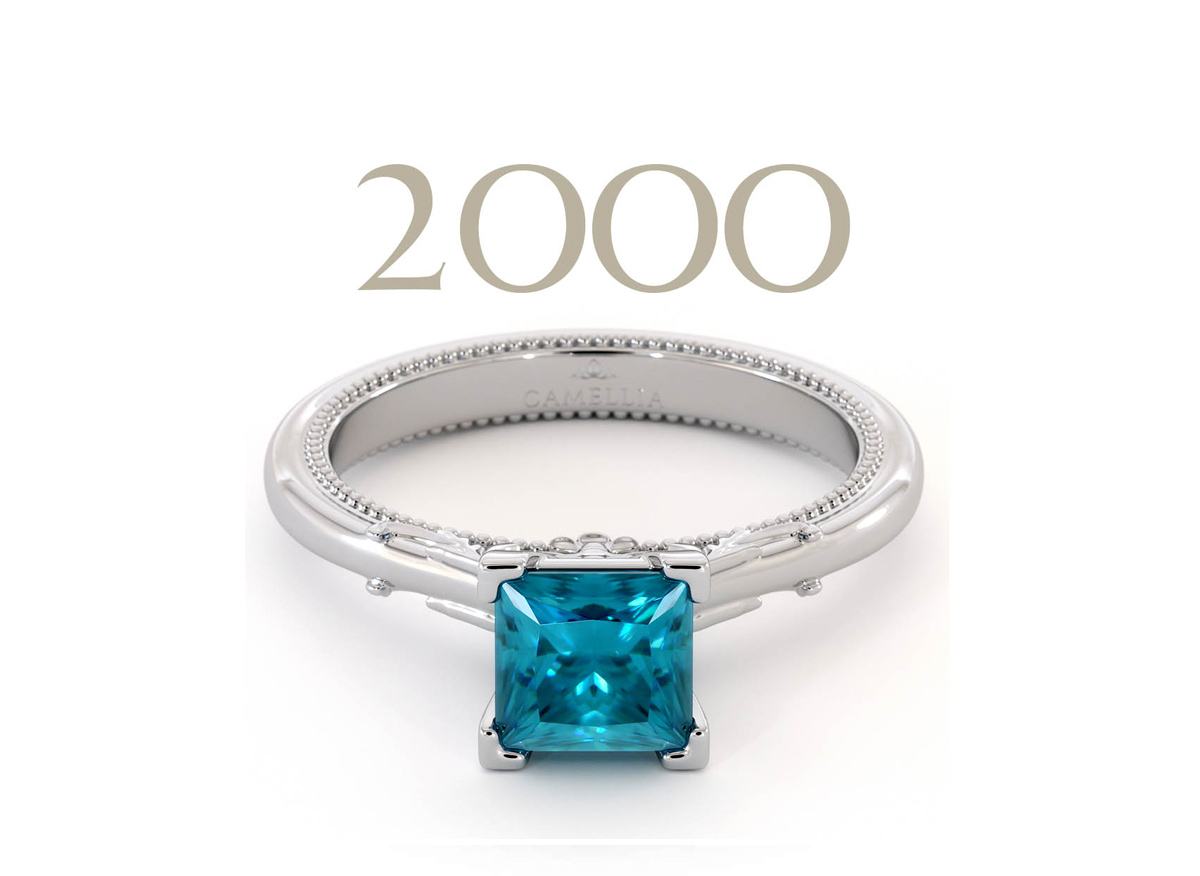 By 2010’s, cushion-cut diamonds and halo engagement rings became the most popular choice for couples. Due to the cushion’s multi-faceted shine, and the halo setting creating the appearance of a larger center diamond and enhancing the engagement ring’s glamor.

Kate Middleton’s engagement ring, which belonged to the late Princess Diana, re-sparks a mini-trend of blue sapphire centers and accents. 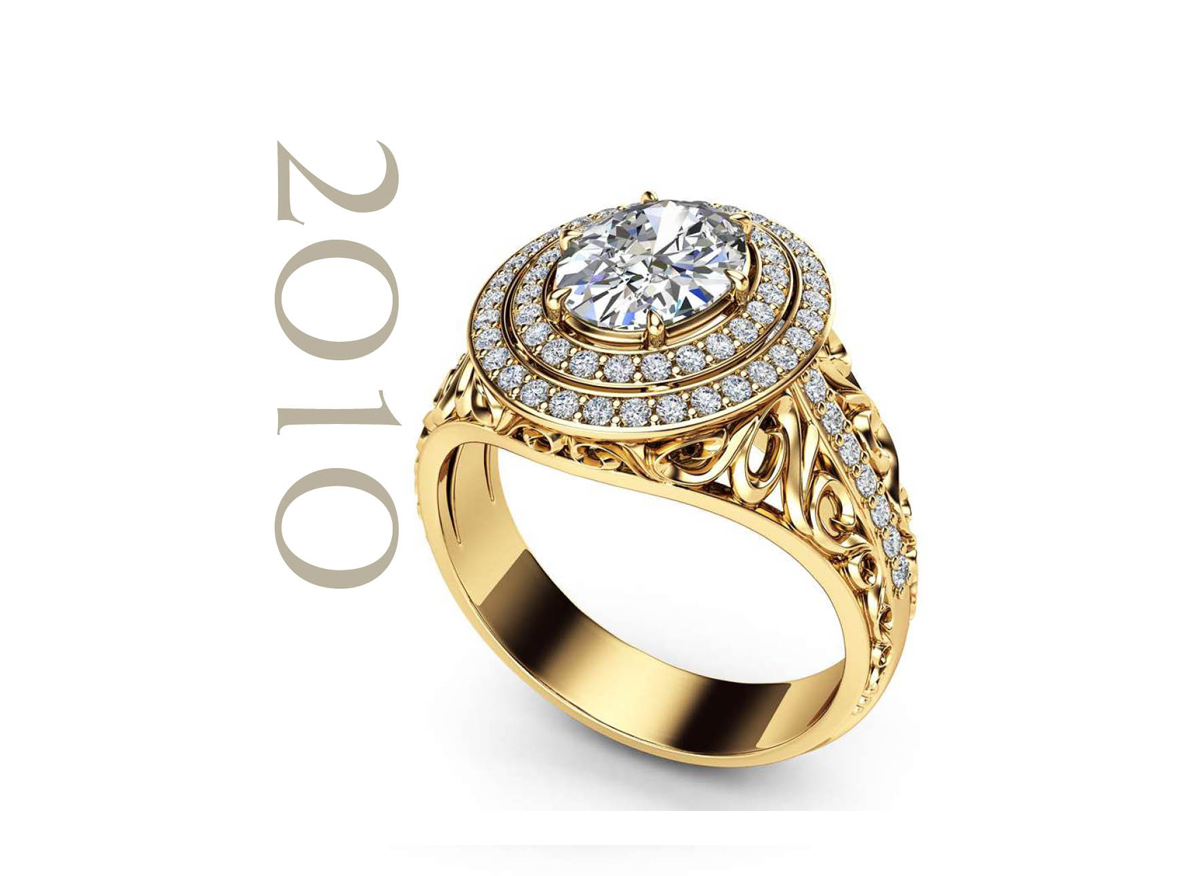 Rose gold, two-tones, and fancy colored diamonds are having their moment. As well as antique or antique-inspired, nature-inspired or truly customized designs that reflect the couples’ history, present and future – each of his or her own, and of them together. 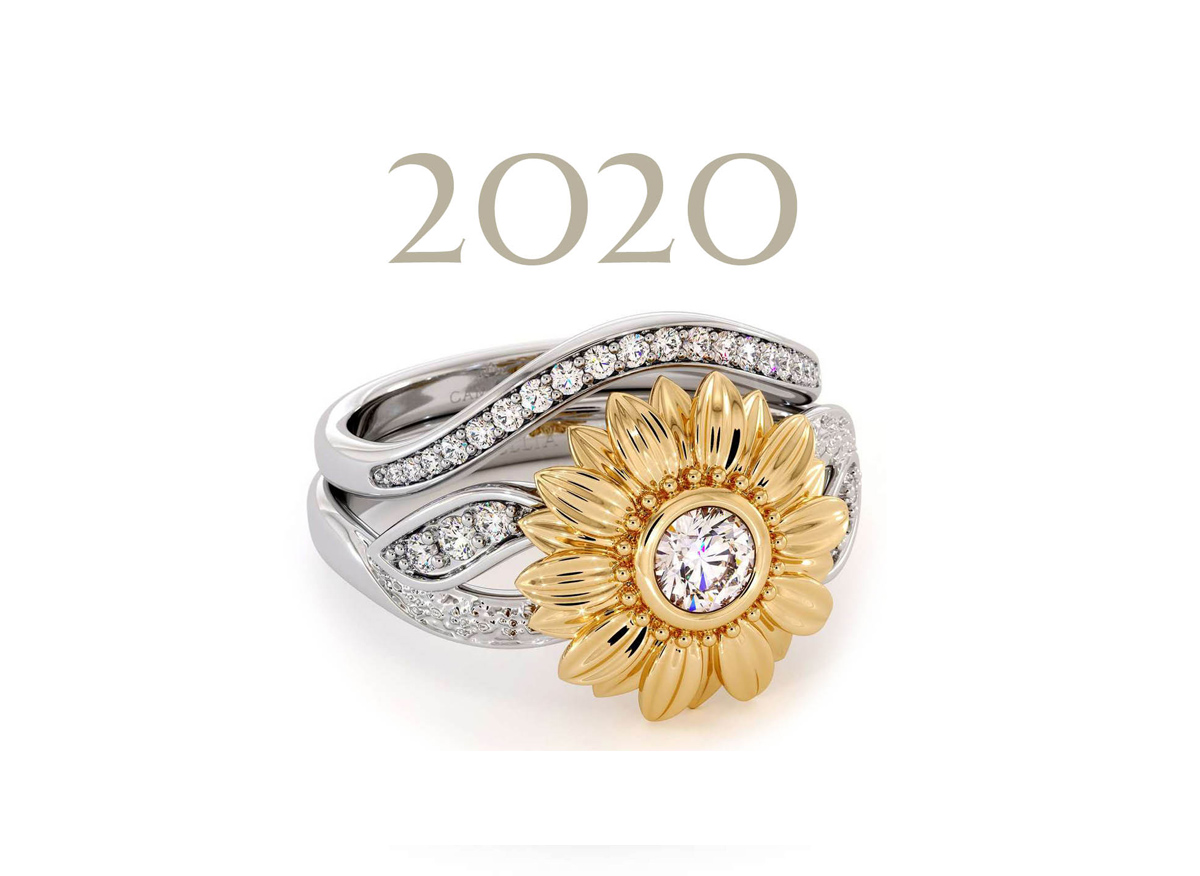 What’s your favorite decade and style?

Related Articles
Our Commitment to You. 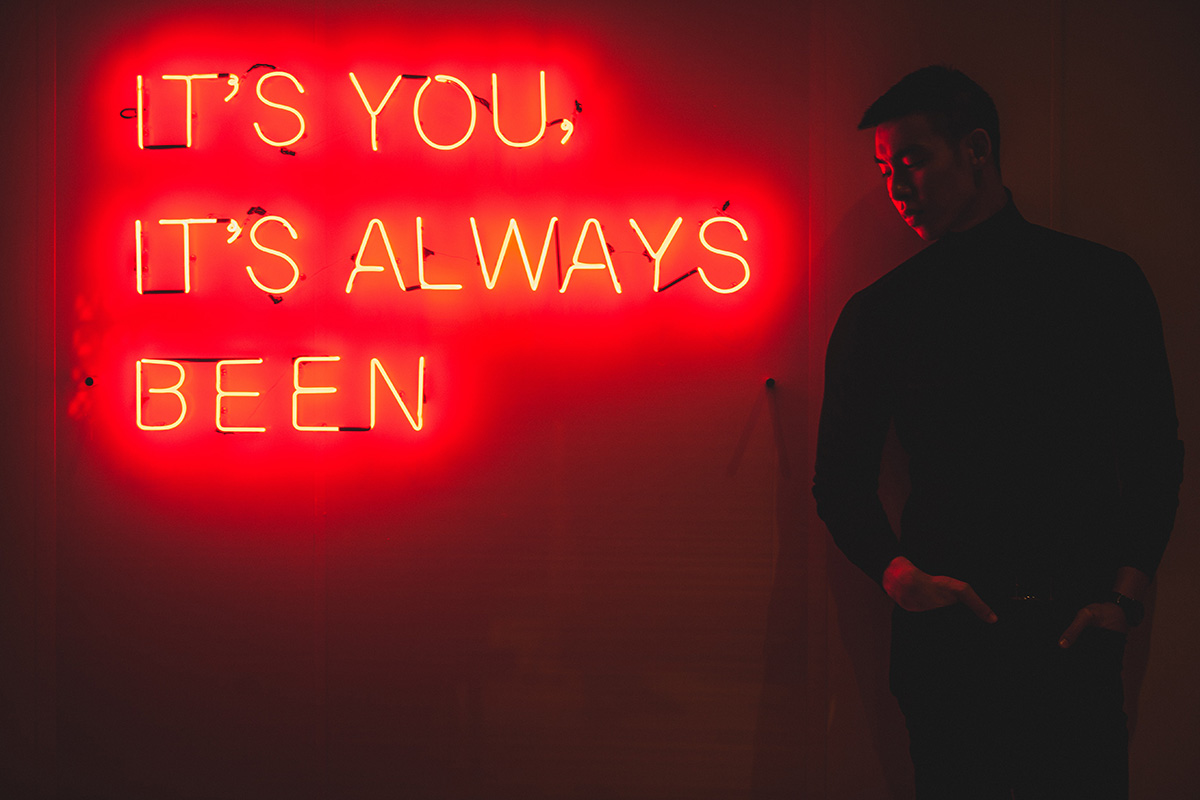 Dear friends. At Camellia Jewelry, we know what an engagement proposal means, in every aspect of it.. We’ve been connecting people for over 5 years, and we’re always committed to earning your trust and satisfaction. That’s why we continue to do so, even more, these days, in times of turmoil and uncertainty – A promise […] 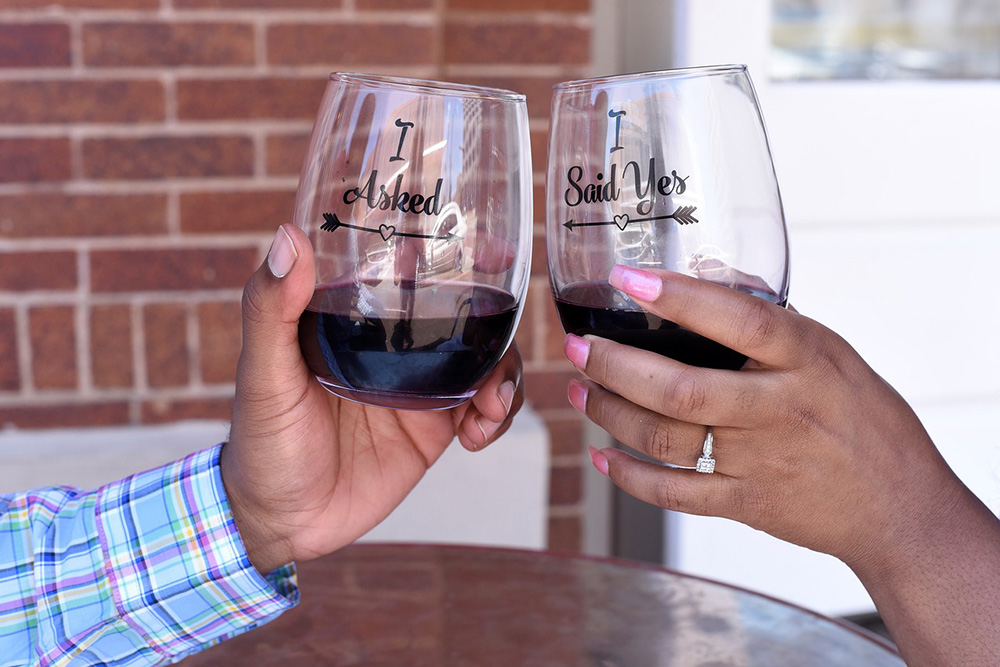 Having a yellow themed wedding is a great color theme for a spring or summer wedding, and though it was considered an underused color up until few years ago, we’re happy to see that the popularity of this shade has been on the rise! The secret here is to use various shades of yellow and […]

Would you like to receive our newsletter, filled with brilliant stuff?